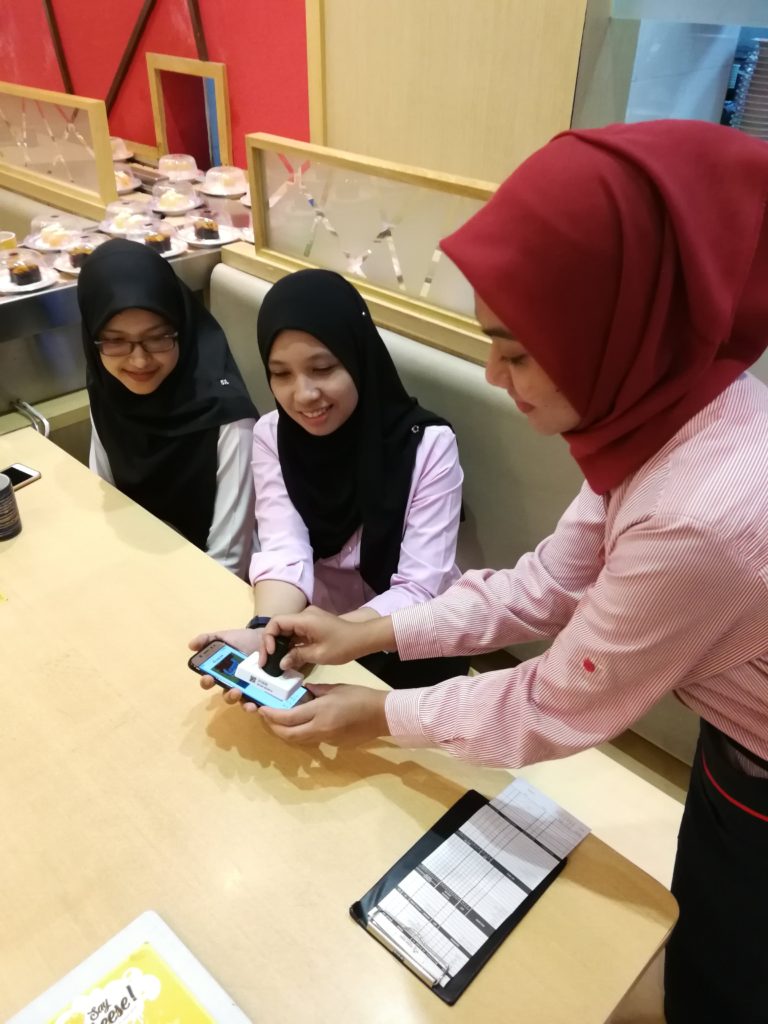 giftee, Inc. has its corporate mission “Using gifts to connect people to people, people to business, and people to communities.” Based on this mission, it provides “giftee”(*4), a casual gift service that allows customers to send gifts online easily, along with the sentiment of “a little thank you” for everyday kindnesses. It also operates a SaaS business providing the “eGift System,” an eGift sales system for businesses. Launching “giftee for Business,” a new solution for businesses based on its original “giftee” service, in April, 2016, and “Welcome!STAMP,” a local e-currency system, in May 2016, the company is using the technologies it has built up in its eGift business to actively develop new businesses.

The Sushi King eGift campaign, SYOK-ING FIESTA (“Festival of Surprises” in Malay) was part of a BtoC program targeting Sushi King’s approximately 360,000 Member Card members that was running from May 16, the eve of Ramadan (May 17 – June 14 this year), to June 7, 2018. Conveyor belt sushi at Sushi King’s restaurants is usually offered at six different prices (RM 2.12 / 3.18 / 4.24 / 5.30 / 6.36 / 7.42 including tax), but during the campaign, items in the four higher-priced categories also were available for a standard price of RM3.18. Member Card members were sent eTickets for this campaign to their smartphones via SMS or Facebook Messenger before the campaign starts. When they received their eTickets, members could present it at any of Sushi King’s 122 stores (excluding Borneo) and had the eTicket validated by the store with a giftee STAMP. Once their eTickets had been validated, members could take advantage of the campaign offer. Each eTicket had a unique code, so when it was validated with the giftee STAMP, the data connected to the existing database, such as the customer’s attributes, the store they visited and what time they visited, could be collected immediately. This enabled the quantitative analysis of the campaign outcomes, which also made it useful as a CRM tool. Further, unlike paper tickets and coupons, as soon as the eTicket was validated with the giftee STAMP, it was “redeemed,” so the same eTicket couldn’t be re-used.

Starting with this project, giftee, Inc. is working on the popularization of its eGIFT System in the ASEAN region, with a focus on Malaysia. It plans to introduce the system to around five brands in that country in 2018. It will also extend its CtoC eGift services overseas in its goal to create a custom and culture of casual gift-giving as a way of conveying one’s everyday feelings, by popularizing eGifts both in Japan and the rest of the world.

(*1) eGIFT Service is a service in which the gift-giver purchases a digital gift ticket online and sends it to the recipient, who can exchange it for goods at the store.
(*2) eGIFT System is a gift sales system provided by giftee, Inc. to businesses. Businesses that introduce eGIFT System can operate their own eGift services on their own websites.
(*3) giftee STAMP, launched by giftee, Inc. on November 27, 2015, is a highly secure, battery-less electronic stamp. Simply by touching the electronic stamp to the screen of the smartphone or other mobile device, the electronic stamp can be checked against individual eGifts and be processed as spent.
(*4) giftee is a web-based service for the sale of eGifts, operated by giftee, Inc.

A campaign conducted at Sushi King restaurants in Malaysia. Conveyor belt sushi at Sushi King’s restaurants is usually offered at six different prices (RM 2.12 / 3.18 / 4.24 / 5.30 / 6.36 / 7.42 including tax), but during the campaign, items in the four higher-priced categories also were available for a standard price of RM3.18. eTickets were sent to the approximately 360,000 members of Sushi King’s member card program by smartphone SMS and Facebook Messenger. After receiving the eTicket, members could take it to any of Sushi King’s 122 stores (excluding Borneo) during the campaign period, showed it on their smartphone screen and had it redeemed with the digital “giftee STAMP” by the store’s staff, so they could participate in the campaign. One eTicket was good for up to six people to advantage of the campaign prices.

With the aim of creating a custom and culture of casual gift-giving as a means of conveying everyday feelings of gratitude, giftee, Inc. is engaged in the provision and expansion of gift services to make them available to more people. Its casual gift service, “giftee,” currently has more than 940,000 members (as of April 30, 2018), making it Japan’s No. 1 casual gift service, with the number of users continuing to grow. It currently handles merchandise from more than 33,000 stores around Japan, including coffee shops, convenience stores, and restaurants so customers can choose from a diverse range of gifts to suit their purpose. The average sales price of gift items is about ¥600. This service offers reasonable gifts that can be sent casually by LINE or e-mail and that will not place pressure on the recipient.

2020.11.12 FamilyMart Malaysia eGift is available via eGift System by giftee〜 available now in more than 200 outlets nationwide in Malaysia 〜

2020.03.03 GIFTEE MALAYSIA to Provide “eGift System” to llaollao 〜 Enabling the use of eGifts at all llaollao outlets, a frozen yogurt brand from Spain operated by Petra Empire Sdn. Bhd., a local Malaysian business 〜

2019.10.16 Announcement of Listing on Tokyo Stock Exchange Mothers (Market of the high-growth and emerging stocks)